Meet Robert Wardhaugh, a father, and an avid role-player of Dungeons & Dragons, a game he has been playing for nearly 40 years. Robert is a history professor at the University of Western Ontario and his passion for Dungeons & Dragons has stayed with him throughout his life.

His basement is his sanctuary, where he and his friends gather to create characters and tell stories together. Robert tells Wired that he spends around 10 hours a week playing this game, around 20,800 hours over 40 years and he doesn’t intend on stopping anytime soon.

Robert has created an entire world within the Dungeons and Dragons universe, a world full of unique characters, from Orcs and Elves to Undead and Zombies, Vampires, all kinds of dragons, and even the big demonic lords from the Demogorgon. He started playing this game when he was 11 and he has now more than 30,000 miniature figurines that have been hand-painted over the years, creating a world of fantasy and adventure.

But he doesn’t just paint them – he also builds the terrains. Robert’s terrains are incredibly detailed, with trees, buildings, and even water features like rivers or lakes, and seasons-related terrains, like snow-covered mountains or desert plains.

Robert’s passion for Dungeons & Dragons, and the detailed world he creates through it, has been a constant companion throughout his life. Through this game, Robert has managed to keep his friendships alive, while at the same time giving them something to bond over.

He has spent countless hours creating terrain, painting figurines, and writing stories for his friends to enjoy – something that will surely be passed down to many more generations of players. It is his hope that by playing this game, no matter how much time passes, the bonds of friendship will remain strong. 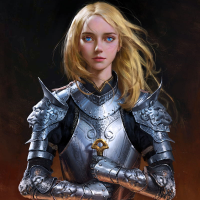 Monique is a medieval history enthusiast with a passion for all things knights and castles. She loves playing medieval-themed video games, and her all-time favorite is the Assassin's Creed series. In her spare time, she enjoys yoga and spending time with her two funny cats.

Top 30 Greatest Medieval Movies Ever Made, to Watch in 2023 (Ranked)

Best Medieval Board Games to Play in 2023